What a month August has been for Box PR; on Saturday 5th August Lou from Box PR headed over to Cowes to help co-ordinate the media opportunities lined up for Greig City Academy Scaramouche. 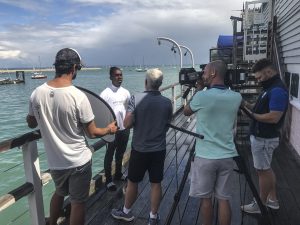 Prior to sitting on the panel, Jon Holt, Head of Outdoor Education at Greig City Academy, along with crew members Shabazz, Montel, Karim and Espoir met with the film crew from the Rolex Spirit of Yachting TV. The morning was spent on Cowes seafront filming interviews followed by hiding from the rain in the Rolex Fastnet Race Media Office at the Sir Max Aiken Museum in Cowes. Here Jon and Montel undertook further interviews before heading off to the main Press Conference.

During the conference Helmsman Montel and Jon Holt, sat alongside previous race winners, those hoping for line honours in this edition of the race and those looking to do this for their own reasons, not all driven by winning, but driven by taking part in this iconic offshore yachting race. Unphased by all the questions, they talked about the project, and their aspirations for the race. For some on the panel, it was about winning, for Saramouche it was about completing and earning the respect of those in the race.

Following the conference there were more interviews both at RORC and oboard Scaramouche with the crew and news of the project a hot topic with the media. With the crew in high demand and on the media radar, it was their job and that of Box PR’s to make sure that as their adventure unfolded over the next few days they would share as much as possible with the media. What a busy six days it was. 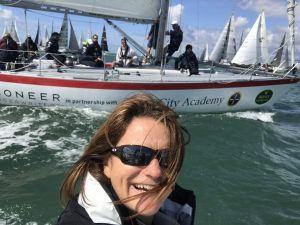 Lou from Box PR spent her birthday watching the start of the Rolex Fastnet Race; being out on the water alongside Scaramouche being able to speak to them and wish them all the best moments before the start made it a day to remember.

During the race Box PR was responsible for updating the Rolex Fastnet Media Team and other journalists who had expressed interest in Scaramouch and in addition to this there were regular updates for posting to the social media pages. The focus on these updates was to tell the story of life on board on Scaramouche and that of the eight students from Greig City Academy. Lou kept in touch with the boat asking questions in order to get video blogs back. Whilst at sea the team even had an interview with ITV London which was aired at 1820 on Tuesday 8th August.

At 01.39.19 on Friday 11th August, Scaramouche crossed the finish line of the Rolex Fastnet Race 2017. In doing so it is believed they are the only non-fee-paying school to do so and the only school in this edition of the race. Quite an achievement, and a remarkable one for those from a school that serves a disadvantaged population, where 70% of the school’s students receive free school meals (a standard measure of deprivation).

Perhaps the cherry on top of the cake for this crew was at the prizegiving on Friday 11th August, when Scaramouche went on to win the media prize courtesy of official clothing sponsor of the Rolex Fastnet Race, Musto.

Here is what the Rolex Fastnet Race had to say: 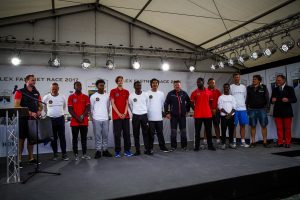 Amongst the fleet of ocean racing pioneers and professionals, were 12 students from north London. Their Facebook and Twitter updates gave armchair sailors the opportunity to follow their every move during their Fastnet passage, but the Royal Ocean Racing Club believe their achievement to complete the Rolex Fastnet Race, as a team of young students in sailing, is something that should be commended.

Their campaign has attracted the eyes of many across the nation, not to mention coverage of their ‘mission’ on BBC News, Yachts and Yachting Magazine, The Times and The Sunday Times and Scuttlebutt Sailing News. Despite all the other fantastic images and video content we received during the race, Project Scaramouche thoroughly deserve this prize.
We look forward to learning more about their continued journey in offshore sailing.

It has been a pleasure working with Jon Holt and the Scaramouche Crew in the build up to and throughout the race. We have seen the Scaramouche team not only develop their sailing skills and confidence, but become ambassadors for the sport of sailing and interacting well with the media. We wish them every success in the future.